For most of my life I’ve tried to do God’s work, instead of doing mine.  And, honestly, I wasn’t very good at it. That didn’t keep me from trying, however.  That’s why in recent years I’ve come to love the prayer Paul prayed for the Colossians and to make it my own every day:

“Be assured that from the first day we heard of you, we haven’t stopped praying for you, asking God to give you wise minds and spirits attuned to his will, and so acquire a thorough understanding of the ways in which God works…  As you learn more and more how God works, you will learn how to do your work. (Colossians 1:9-11 MSG)

That’s what I want.  I want my mind and spirit to be so attuned to God’s will that I can acquire a thorough understanding of the ways in which he works. I wish someone had taught me that when I was younger. When we don’t have any understanding of how God works, we’ll spend all our energies trying to be God to others. Even on our best days, that will only make a mess of things.

Learning how God works changes everything! He’s not a projection of our better selves, but Wholly Other, who thinks and acts in ways that confound my natural mind. When we think we know best, for ourselves or others, we usually end up working against him rather than with him.

Jesus asked me to love others like he’s loving me, to proclaim with my life and words the reality of Christ, and to help those who want, to know the God I know. It has become a major focus of my walk now to see what God is doing and how he’s working, especially when he isn’t acting in the way I think he should. When he’s not doing what I think is best, what is he doing? That’s where we learn how different, and how much better his ways really are. It is so much easier to live inside what he asks of me today, when I see, if even just in glimpses, how he is working in people and situations around me.

It helps me be more patient, because I realize God is not in the hurry that I am. It makes me softer toward marginalized and hurting people, because I know he doesn’t always wave his magic wand and fix everyone’s need instantaneously, and more often he wants me to be his gift to them. I’m not so settled on my ease and comfort because I know there isn’t any tragedy that he can’t work in for incredible good. And when I’ve given up trying to change me, I give up trying to change others around me as well.

I’m still learning to take my cues from what Father is already doing. Ask him to show you in the very circumstances you’re in right now. Instead of giving into anxiety and trying to fix them yourself, ask him to show you what he is doing. When you know what he’s doing, then you’ll know how you can respond in trust and be part of what he’s doing.  It’s more fun than trying to do his job, that’s for sure!

A Huge Harvest in Pokot

Progress continues in Kenya, and I’m always blessed by those who help us. In the last couple of months, the pumps in the Living Loved Petrol Station (see picture above) that we built to support the orphanage, died after eight years. They were only meant to last five.  We had to replace them at a cost of $24,000. They are learning now to set funds aside each month to replace them at the end of the next cycle.

The four agricultural projects in Pokot have branched out to five and the produce has been prolific. You can’t imagine the joy and awe of people who have been nomadic throughout their history, to be able to grow their own food! They are euphoric, and grew so much that they had new expenses as to how to dry and store the produce for future months.  And thanks to so many of you who have continued to send in your gifts to help. We’re 2.5 years into a 5-year plan to help them gain some measure of sufficiency.  Even the local government has taken notice of these agricultural projects and are helping out as well.  If you have extra to help in this process, it will always help. As always, every dime you give us ends up in Kenya. We take nothing for administrative or financial transfer fees.

I head to San Diego County this weekend, and then after a brief trip through Wisconsin, Tennessee, and South Carolina, I’m returning home for year-ending (at least as far as travel goes) minor surgery on an old broken toe. I need a bone chip removed, which is working its way into a joint, but it will put me on injured reserve for the rest of the year. So, I’m going to be staying close to home through the holidays.

As far as 2019, I’m already praying about possible trips to: Northern California, Georgia, West Virginia, West Texas, Upstate New York/Toronto, Kenya, and Southern Florida. If you have anything on your heart, now is the time to let me know.

So, during the rest of this year I’ll be able to give some time to the three book projects that have captured my attention. 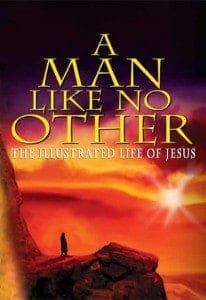 As you consider gifts for friends and family this year, keep in mind the books and audio available in the Lifestream Store. Especially, A Man Like No Other is an excellent gift for people as it re-tells the life of Jesus without all the religious stuff we have added to him.  It’s book of paintings done my award-winning artist, Murry Whiteman with text by myself and Brad Cummings. It’s not a children’s book per se, but I know families who use it for a devotional because the pictures draw the kids in and the text often provokes lots of questions.  As a special, we are reducing the normal sale price by $5.00 until Christmas Day.  (As always with international  orders, please email the office for a quote. Shipping rates are always off for those orders.)

Wayne was in Kelowna, BC recently at the invitation of the two young moms that host, Confronting Normal, a podcast that helps us rethink what “normal” spiritual life might look like. While there I recorded a two-part interview that is now available on their podcast. They asked some great questions and we processed some wonderful things together. If you’d like to listen to them you can get Part One here, and Part Two here.

In Case You Missed It…

Here are some of the podcasts and blogs that have generated a lot of interest over the last couple of months.

Which Cover Works for You?

At Home In the Sierras

1 thought on “Seeing How God Works”