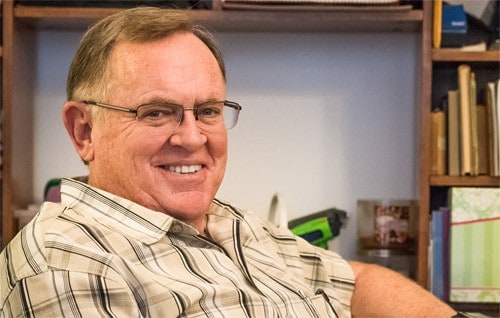 Simply put I am the son of a farmer, a husband to Sara, the father of Julie and Andrew, and a grandpa to some delightful children. I consider myself a brother on a journey, willing to share what God has given to me in any way that will help others discover the joy of life in him. As you will see the Lord has been gracious to me, and everything he has done in me and through me is by his mercy and grace. I hope the real story you glean from these pages is a greater awareness of God’s unfolding work in you, not in me. That’s a story worth knowing.”

I have been on a life-long journey to sort out what it means to live in the love of the Father. I also have an unremitting desire to help other people who are on that journey or want to go on it, which is why I maintain Lifestream.org. I enjoy helping people discover how to live loved by God and to live freely in healthy friendships with other believers. As we learn to do that, we’ll also find that we will quite naturally become a conduit of God’s compassion to a world that is broken and devastated by sin. I have shared this story in books and articles, spoken of it in teachings,which you can find out more about on this website. I also co-host a regular podcast at The God Journey. 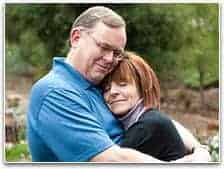 In 1975 I married my college sweetheart and we’ve shared every step of this journey ever since. I thank God every day for the relationship he’s given Sara and me. We have two children. Julie is married and living about fifteen minutes down the road from us with her husband, Tyler. They are also the parents of our grandchildren, whom we love a lot. My son, Andrew, is a guidance counselor at UCLA.

My journey began on a grape vineyard in central California, where I grew up as the third of four sons. Our parents attended the Baptist fellowship, but got involved in the earliest days of the Charismatic renewal where we discovered a God that wanted to be intimately involved in the circumstances we faced daily. This tapped a deep hunger in me to know God. After graduation from high school, I attended Oral Roberts University and graduated in 1975 with an honors degree in Biblical Studies.

For the next five years I was an associate pastor at a growing congregation in Central California. I learned a lot there, but grew disillusioned by the way the priorities of an institution overwhelmed the simple, relational life in Jesus. In 1980 we left to help plant a new fellowship in Visalia. This fellowship was designed to be an intimacy-based fellowship with Jesus at the center, and ministry committed to personal relationships instead of programs. I didn’t want to manage people’s lives nor the institution’s programs, but to help people love Jesus more deeply and learn to live in response to his voice. House churches anchored our life together, and God began to open doors for ministry beyond the fellowship.

During this time I wrote a number of articles for various Christian magazines, and served as a Contributing Editor to Leadership Journal. In 1987 I finished writing my first book, about the absence of spiritual intimacy in the life of the Western Church. It was titled The Naked Church which was re-packaged and re-released in 1991 as A Passion for God’s Presence. In 1992 The Vineyard was released which was a farmer’s view of the vine and the branches from John 15. During this time I was also invited to teach in churches and universities throughout the world. Under the auspices of Youth With a Mission I made trips to Europe and Asia and taught regularly at the University of the Nations in Kona, Hawaii.

In 1994 it became clear to me that fulfilling the cultural role of a pastor was at odds with the work God was doing in my heart. In spite of our best efforts to the contrary, the congregation I helped start had become another institution with some of its leaders more enamored with power than service. Attempts to work through that was complicated by a division in our elders regarding the future course of the fellowship. Some wanted to handle our growth through more elder-managed programs, and others wanted to see our relational life multiplied into new congregations. Through an incredibly painful time we knew we had more to learn by walking away from something we loved very deeply, rather than fighting to preserve our place among them.

Over two very painful years God rewrote a major part of spiritual lives by showing us how much we had tried to build his church on the religion of human effort and had not by recognizing how he is building his church in the world. I learned how much my desire for people’s approval had blinded me to the simplicity of the gospel. During this time I discovered a better understanding of the cross that forever demonstrates to me how deeply Father loves me and how living in that love would transform me to be more like him. He also transformed Sara in ways I would never have believed. Most of the lessons we learned in that season are in He Loves Me. Coming out of that season we found the freedom to live the life in Jesus we always believed the Scriptures invited us to experience. Others had discouraged us as being too idealistic, but we soon discovered that God’s life was even better than we had imagined. Our worst days outside the systems of religious obligation are still far better than our best days inside it.

Every attempt I made to seek normal employment was met with a deep sense that I was beyond what God had asked of me. I kept hearing him promise to provide for us as we simply continued the work he has given us. Over the years since we’ve seen God provide for us in some pretty unique ways that allowed us to share our life with the world. Surprisingly, we found ourselves more released to do what God had asked of us than we had ever dreamed. Not that that has come without pain and trials. Like most people we have known seasons of great joy and seasons of deep pain and struggle. Through it all Jesus has continued to draw us more deeply into the life of his Father.

In 1995 we formed Lifestream Ministries to coordinate my writing and traveling to encourage others. At the same time I was being increasingly invited to help school districts and parent groups resolve religious tensions in public education because my work along those lines in Visalia. Through BridgeBuilders I make presentations to school districts and education associations as well as do consultation and mediation where conflicts break out. I don’t do as much of that now that my life has taken a different direction.

So I have continued to write and record those things that I hope will encourage others to follow Jesus rather than stick to the imagined safety of the status quo. Authentic Relationships and So You Don’t Want to Go to Church Anymore were written and released during this time. I also began to co-host a podcast at The GodJourney.com to encourage others in the conversations that lead to authenticity and life. In 2005 at the insistence of the author of the original story I got involved with a novel called The Shack. I loved its theme and ended up spending sixteen months rewriting the book. And, when we couldn’t find a publisher to release it, ended up helping found the publishing company that launched it to the world, selling a million copies in just 13 months from a garage. The ensuing years became a whirlwind of opportunity and eventually lawsuits when those involved no longer wanted to honor their word. Fortunately that is all in the past now and I have been able to settle back into a life of writing and encouraging others on this incredible journey.

Sara and I now live near the breathtaking California Coast about 35 miles northwest of Los Angeles in the rolling hills of Newbury Park. Sara and I have no idea where this journey will lead from here. We are enjoying our partnership even more as it has extended into Lifestream. Sara is a board member and the business manager of both Lifestream Ministries and BridgeBuilders and her insight is a valuable part of sorting out God’s direction in both of these areas. I have further writing and teaching projects underway and a regular stream of invitations to come and share what living loved by the Father and loving others looks like. If we could ever be a blessing to you or people you know, you have only to ask. We are passionate about helping people discover the joy and power of relational Christianity.

We are also connecting with an ever-growing group of people in this area who are living outside the box of organized religion and are learning to share a journey of faith without all the institutional politics. We don’t claim to see more than a few steps down the road. We want to follow the Lord’s call on our lives however he leads us and not seek to grasp anything for ourselves. Five years ago we had no idea we would have ended up where we are today. If we are as surprised in the next five, that will be fine with us too. We want nothing more than to one day sit on the lap of our Father and hear him say, “You did what I wanted you to do!” We already know that won’t mean that we did it perfectly, since we already made our own share of mistakes, but it does mean we want nothing more than his purpose to be worked out in us, no matter where that leads us.

And we want nothing less for you, either!

For further information you can hear Wayne’s story in a video interview he did in the summer of 2015:

Learning To Live Loved: Part One

This is part one of a two-part, lengthy interview done with some documentary filmmakers in Indiana. We spent an hour and twenty minutes by a campfire, on a late summer’s evening, talking about my life and writings, and learning to live loved.

The second of a two-part, lengthy interview done with some documentary filmmakers in Indiana. We spent an hour and twenty minutes by a campfire, on a late summer’s evening, talking about my life and writings, and learning to live loved.