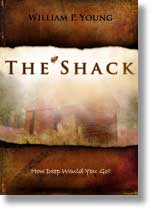 I know! I know! I have been way too busy of late and some travel as well as work on a manuscript has left me woefully behind in emails and updating my various websites. It turns out Iâ€™m going to be a literary agent for awhile in my spare time, and perhaps be involved with a screenplay and movie production. All of this, because a few days after Christmas last year an unpublished manuscript arrived unannounced an unexpected in my inbox.

That is not unusual. Lots of people send me manuscripts and articles to read and I try to give as much time to them as I can and get some feedback to the authors. So I printed off a few pages to do that when I found myself on the ride of a lifetime. This book captured me in the first few pages and wouldnâ€™t let me go until I finished it. At its end it left me in tears for over twenty minutes overwhelmed by the immensity of a Fatherâ€™s love in his broken universe. And I didnâ€™t even cry at the end of Olâ€™ Yeller!

The book is called The Shack and the gist of the story is this: In the midst of Mackenzie Phillipsâ€™ great sadness, he accepts a disturbing invitation to return to the shack, the scene of his 6 year-old daughters grizzly murder four years previous. There, he is confronted by a middle-aged black woman claiming to be God and thus begins an incredible weekend that turns his world upside-down.

The book was written by someone Iâ€™d only met a year previous. Frankly, this is one of the most absorbing depictions of God in his universe I have ever read. It is clever, colorful, witty, powerful and full of insights about the God I know. And it wasnâ€™t even written specifically for believers! Though believers will find it engaging even as it challenges some of their religious constructs, The Shack will also hold great interest for nonreligious people. It wrestles in a most creative way with the universal question: Where is God in a world filled with unspeakable pain and loss? In that vein, this book and its edgy story will have incredible crossover potential. It has inspired my own journey and I find myself wishing every person I know had already read this book so we could talk about it.

Unfortunately I canâ€™t put a copy in your hands today. I wish I could. This is one of those special books that comes along rarely in a lifetime. The author was raised among cannibals in West Papua, suffered great loss as a young adult and has overcome a host of inner struggles to live a fulfilled life in Christ now into his 50â€™s. As I got excited about this book, so did a couple of filmmaker friends of mine and weâ€™ve put together a small team that is working with the author to ready the manuscript for publication, seek out a world-class publisher to get it in print, and turn it into a screenplay for a feature-length movie for general release at a budget of $15 million.

This is definitely a journey for me into uncharted waters, but I felt strongly enough about this book to help it find its way into our culture. It presents God in a way that our world rarely sees and rings with authenticity and overwhelming joy. It will help you in your own struggles to sort out Godâ€™s love in the midst of inexplicable suffering.

Already God has opened the door to put this manuscript in the hands of some major publishers and has opened conversations with others who may invest in the movie production. I would appreciate your prayers as this process unfolds. I also have no idea who is reading this blog and thought it might be worth asking if any of you have an in to a major publishers of general interest fiction, either Christian or secular. If so, Iâ€™d appreciate you helping me make that connection. Though I have many contacts in the publishing industry because of my own writings, there may be other connections God wants to make.

And if anyone has an extra $15 million lying around and would like to invest in an astounding production of this film, we would love to hear from you to.

Why a Wayne Jacobsen Book?

You Can Help Jake Find His Way to the Big Screen

The Shack Movie: Caught Between Reality and Fiction

8 thoughts on “Where Has Wayne Been?”