The conclusion came with a wave of grief and sorrow I was not anticipating.  It felt as if I stood on holy ground amidst the wooden boards of the dilapidated shack with shards of light piercing the semi-darkness from cracks in the walls. The hole in my heart was so vast I felt loss and lost.

I was so disoriented for a few moments that I’d forgotten all this was fiction. There was no Missy and she had not been murdered. She was part of a story I’d helped to write and in fact this setting was the first chapter I’d rewritten after the prolonged insistence of the original author to help him rework his manuscript. I’d been drawn back to that moment and the setting was exactly as I had imagined it.

No, I wasn’t dreaming I was on the movie set for the film adaptation of this story in July of 2015.  Brad, who had also helped on the rewrite and was now a producer on the film, was showing me the shack set, built out of old barn wood alongside a lake in British Columbia.  We were alone as we walked across he porch and inside the shack.  I took it in, eerily familiar on a visceral level, though I’d only been here in my own imagination.  Seeing it in reality was disorienting, disturbing the line between reality and fiction.

Brad watched me take it in and so he was already looking at me when I turned to him.  “Where?” I mouthed. Any noise seemed so inappropriate here.

Knowing what I was asking he nodded to the floor not far in front of me.  Until that moment I had been on a set.  In the next, my heart plunged into the depths of sorrow as I felt the loss of an innocent little girl to the tortured heart of her killer. My heart began to break with sorrow.

And then reason slowly began to take over.  “Wait a minute. No one died here. This is a movie set.” Like waking from a vivid dream each thought sought to break the hold of my emotional reaction and remind me that this was a simple convention in a fictional story. It took some time, but reason finally won out and I was once again back on a movie set, though still surprised at the emotions it hat provoked. It’s what others had experienced reading the book, that blurring between a fictional story and the reality of our own pain.

That’s what The Shack was designed to do, to carry the pain of its readers before God in a way that would allow him reveal himself as more good and loving than any of us would dare to believe amidst the tortured brokenness of the world we traverse. It seems far easier for us to blame God for our pain than to let him show us a greater reality beyond it and the immense love he holds for his creation.

I wanted to stay there as long as I could and soak in the moment, but we had to move on.  The film crew was elsewhere and we didn’t want to miss the day’s shoot. As we walked back to the car I couldn’t help glancing over my shoulder to take it in. There stood the shack just like we’d imagined it as a crew around it was winterizing it for tomorrow’s shoot. I can’t wait to see what comes from it all.

There’s a mild antipathy inherent in any film production between the film company that wants to creatively adapt the story to a visual medium and those that worked on or enjoyed the book and want to see it stay faithful to the original story. I hear an ominous concern from many readers who love the book so much, fearful they will be disappointed if the film doesn’t live up to their imagination.  They want my assurance that the story is in good hands.

There is much to be done before we’ll know for sure so we’ll have to see what comes of it.  It will be different—a movie and a book have to accomplish different things.  But having been on the set for a couple of days and meeting some of those involved in this adaptation, I came away wonderfully hopeful.  Hearing words that are so meaningful to me in the mouths of actors touches a deep place in my heart, listening to so many who were touched by the book, and seeing the scenes come to life with such beauty, was exhilarating.  And there was something indefinable in the air and I suspect more is at work here than the human hands touching it.

In the end it will be a beautiful movie and I am hopeful that it will unfold God’s reality in a way that will touch many more people who haven’t yet read the book. 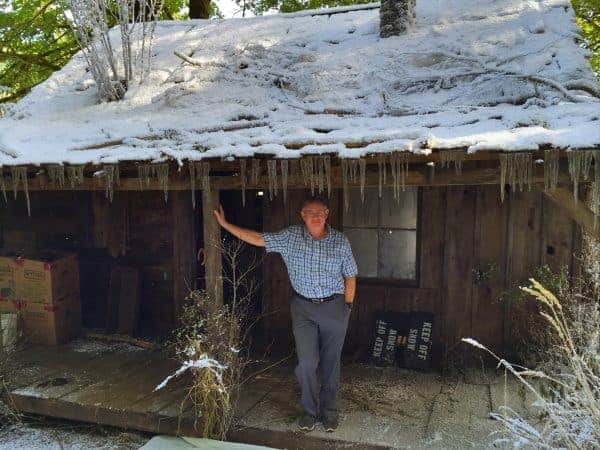 I wrote the above right after I returned from the set but was not allowed to post it at the time because of restrictions from the studio.  I can now.  Two days before Christmas I got to take my family to a special screening and see the entire finished movie. It was my first time to see it color corrected, with all the special effects and the music. Wow!  It is simply amazing, and my family thought so too. It was weird to watch people in the the theater cry or laugh to some of the words I wrote and the scenes I helped create. But the main messages of this movie that I wanted to convey are fully intact within it.  There is so much here as to how God can touch the lives of people.

And, yes, the controversy is beginning to rage once again by those who think we want the world to believe that God is a woman or that we got some detail of the Trinity not quite right. Unfortunately they miss the greater story—that God is capable of walking into the depths of our most painful disappointments and despair, win us into his love, and walk us out into reality and freedom.  It’s all about relationship. It’s what God desired before the Creation and what heals the restlessness and brokenness in our own souls. That comes through wonderfully clear in the movie. It’s not a perfect movie and there are bits that I would change if I had the power, but what is here is a faithful depiction of the story we worked on and some visuals that are amazing. I was touched at a heart level many times and I knew what was coming.

But you don’t have to take my word for this alone.  The studio has been running trial screenings in various markets. They’ve come away very encouraged by the audience reaction. Two of the statements audience I’ve heard repeated are: “The Passion shows us what, The Shack shows us why!” and, “Finally Hollywood gets it right!” Honestly, I think they did here.

Two of my friends got to attend two of those screenings, one in Atlanta and one in Colorado Springs.  I had no idea until they wrote me to share their perspectives:

From Colorado Springs:  We were privileged to attend the preview showing of The Shack last week. So well done, and moving. Several unexpected moments of revelation and exhortation throughout.

From Atlanta:  All I can say is, WOW! Brad – you did an awesome job fighting for keeping the integrity of the book with Hollywood. Not that I have it all memorized, but it seemed like the majority of it was kept intact. As an actor and Christ-follower, I have a high (and maybe even a super sensitive) BS meter when it comes to “Christian” movies — and that could be because of the acting or the writing or cheese-factor I see in most of those flicks. That meter didn’t go off one iota in The Shack. The directing was great. The acting was even better. And this is something I feel I can tell others to go see. I’m excited to see where this will go! Unfortunately, my wife didn’t get to goodie to a prior commitment so I took a friend with me who had never read the book.  He is going through a painful season in his life. He absolutely loved it. I asked if he had a favorite part and he mentioned the portion with Mack and “Wisdom” was his favorite.

It’s only a few weeks now until the movie will be out for everyone to see.  March 3 can’t get here soon enough for me, but I do have to run off to Jordan and Israel first. We’re still planning on hosting a showing here in Thousand Oaks, CA either on February 25 if we can get permission to do it a week before the release, or March 4 if we can’t. Hopefully we’ll nail that down in the next week so people can begin to buy tickets. If you’re interested sign up here.

When Is THE SHACK Coming to Your Country?

Spotlight: A Movie Worth Watching

12 thoughts on “The Shack Movie: Caught Between Reality and Fiction”