I know not everyone appreciates this kind of humor, but I enjoyed it. This was sent to me by a creative bloke, Joe in Montanaâ€”The Law-Man: The Monthly Newsletter of Those Protecting God’s Law. 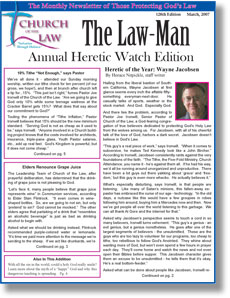 Hailing from the liberal bastion of Southern California, Wayne Jacobsen at first glance seems every inch the affable fifty-something everyman-next-door. He casually talks of sports, weather or the stock market. And God. Especially God.

And there lies the problem, according to Pastor Joe Ironwill, Senior Pastor of Church of the Law, a God-fearing congregation of true believers dedicated to protecting Godâ€™s Holy Law
from the wolves among us. For Jacobsen, with all of his cheerful talk of the love of God, harbors a dark secret. Jacobsen doesnâ€™t believe in Godâ€™s Law.

â€œThis guyâ€™s a real piece of work,â€ says Ironwill. â€œWhen it comes to subversive, he makes Ted Kennedy look like a John Bircher.â€ According to Ironwill, Jacobsen consistently rants against the very foundations of the faith. â€œThe Tithe, the Five-Fold Ministry, Church
Attendance, you name it – heâ€™s against them all. If he had his way, weâ€™d all be running around unorganized and unproductive. There have been a lot guys out there yakking about â€˜graceâ€™ and â€˜freedom,â€™ but this guy is even more whacko. He actually believes it.â€

Whatâ€™s especially disturbing, says Ironwill, is that people are listening. Like many of Satanâ€™s minions, this fallen-away ex- pastor has embraced the curse of our age – technology. â€œIn the old days, a nutcase like this would have a few groupies in robes following him around, buying him a Mercedes now and then. Now weâ€™ve got people all over the world listening to this garbage. We can all thank Al Gore and the Internet for that.â€

Asked why Jacobsenâ€™s perspective seems to touch a cord in so many believers, Ironwill turns vehement. â€œThis guyâ€™s a genius – an evil genius, but a genius nonetheless. He goes after one of the largest segments of believers – the unsubmitted. These are the guys who are too lazy to volunteer for our programs, too cheap to tithe, too rebellious to follow Godâ€™s Anointed. They whine about wanting more of God, but wonâ€™t even spend a few hours in prayer each day. Theyâ€™ll come home and watch the news and not even open their Bibles before supper. This Jacobsen character gives them an excuse to be unsubmitted – he tells them that itâ€™s okay. Heâ€™s a real bottom-feeder.â€

Asked what can be done about people like Jacobsen, Ironwill replied… (continued on page 2)

Also In This Edition

With all the sin in the world, could a holy God really smile? Learn more about the myth of a â€œhappyâ€ God and why this dangerous teaching is spreading. Pg. 4

10% Tithe â€œNot Enough,â€ says Pastor. Weâ€™ve all done it – attended our Sunday morning worship, written our tithe check for ten percent (of our gross, we hope!), and then at brunch after church left a tip for…15%. â€œThis just isnâ€™t right,â€ fumes Pastor Joe Ironwill of the Church of the Law. â€œAre we going to give God only 10% while some teenage waitress at the Cracker Barrel gets 15%? What does that say about our commitment to God?â€ Touting the phenomena of â€œTithe Inflation,â€ Pastor Ironwill believes that 15% should be the new minimum standard. â€œServing God is not as cheap as it used to be,â€ says Ironwill. â€œAnyone involved in a Church building project knows that the costs involved for architects, insurance, triple-pane glass, Youth Pastor salaries, etc., add up real fast. Godâ€™s Kingdom is powerful, but it does not come cheap.â€
Continued on pg. 5

Yes, this is a spoof. No, there weren’t really any page 2, 4 or 5, so that’s all that was written. And I don’t know where they got some of that stuff. I do believe in the Ephesians 4 gifts to the body, but I see them applied very differently than the institutional way many people think of them. Humor makes some powerful points! Can you believe, ‘the myth of a happy God’? Unfortunately that’s how some people see it.

Last Trips of the Year

Giving and Generosity: Living in the Relational Church – Part 4

14 thoughts on “Heretic of the Year”