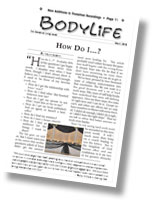 A new issue of BodyLife, is up on the Lifestream website. This one has to do with sexual freedom in the midst of a sexually obsessed culture.

Interestingly enough there is a new study out by the National Institute of Health and the Center for Disease Control pledges about teens who take virginity pledges. On the upside the study found that those who take virginity pledges delay their first sexual encounter by 18 months over those who do not take the pledge. They tend to marry and younger ages and have fewer sex partners. On the downside, those who take an abstinence pledge are just as likely to get sexually transmitted diseases as their counterparts because they experiment with risky alternative sexual activities that they don’t consider are included in the pledge and are less likely to use condoms.

Abstinence educators have dismissed the study and its conclusions as politically motivated. That’s sad, because there is much to be learned here. I hate seeing this turned into a political football, and both sides do it, rather than learn something from this study that will actually help us in our struggle to communicate sexual realities to our children. Do we unwittingly put kids of faith at risk of contracting a destructive STD, because we think telling them to say no is enough? A few years ago someone introduced me to the failure rate of abstinence. I was shocked to hear the term because I though abstinence until marriage is pretty foolproof. But the failure rate of abstinence is how many Christian teens in a hot and heavy moment on a Friday night fall of the abstinence wagon. And because they have to convince themselves the encounter was unplanned for guilt purposes, they rarely use any kind of protection. I’ve talked to a lot of kids in their twenties from Christian homes who confessed to this kind of struggle in their teens and their parents had no idea.

The study only points to something Paul makes said in Romans 5-8, that where law increases sin increases all the more. The focus on a pledge alone, without a relationship to the living God that sustains that pledge and transforms the life from within will have a limited effect. The mind set on abstaining from the flesh is still a mind set on the flesh and it can only produce death. We certainly have to give our children more tools than a vow of abstinence if we’re going to help them value one of the greatest gifts God gave and use it with absolute safety in the way God designed it.

A Couple Struggles with Pornography

To My Sisters Raised in Captivity

10 thoughts on “The Failure Rate of Abstinence”