A Girl and Her Daddy! 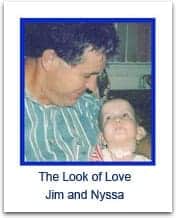 “Majesty, worship his Majesty…” The familiar words rolled off my lips as I sat among a group of believers from all over the western U.S. who had gathered to share their experiences in relational church. It was Sunday morning and we were just beginning with a chance to sing songs of praise and thanksgiving for God.

We had sung a number of choruses that had drawn their theme from the songs of the angels and elders around the throne in Revelation–glory, honor and power!

As much as I know that our loving Father is worthy of all that and far more, something wasn’t sitting right in my heart. Sitting next to me that morning was a 3 1/2 year-old girl, cradled in the arms of her father, Jim. Nyssa (pronounced Nih-suh) struggles against the complications of Freeman Sheldon Syndrome, a genetic muscle disorder that has caused severe scoliosis (curvature of the spine) and disfigured fingers. She is fed through a tube to her stomach and the disorder renders her unable to talk, walk or play like other children. In fact she can only lay cuddled in her father’s arms, cooing and slobbering. But if you could have seen the connection between her and her father and the love and adoration that beamed from his face as he whispered to her and jiggled her in his arms.

“That’s what I want!” The words sailed through my mind so quietly I almost missed them. I had to stop a minute and ask not only what I had heard, but where it had come from. Certainly this wasn’t my thought. After a few moments of mediation, however, I recognized Father’s voice in it and suddenly it dawned on me why my heart had been so unsettled that morning.

We were exalting God, joining the great throng of angelic beings that surround the throne with praise and adoration to God. He was wanting us just to enjoy a moment in his lap just like that father and his daughter; with an intimacy that no moment of adoration could rival.

Now, please don’t miss my point here and think that God or I have a problem with adoring him for his greatness. I know I don’t, and fairly sure he’s fine with it too! But could it be that he wants something more? That it might even be possible for us to hide in a throng of people exclaiming praises about God and miss what it is to really touch him

As I thought about that for a moment, I had to ask myself what I would prefer most. Would I rather have my children sit on the couch and tell me what an incredibly awesome father I am, repeating the same words over and over again so I was sure to get the message; or, would I rather take a walk with them, sharing their joys, concerns and presence?

As the father of a 19 and 21 year old, that question isn’t even a tough call. Far more than their adoration, I’d rather have my children’s affection. Could we dare to believe that God wants the same from us? Of course we can give him both; in fact, one could argue that adoration almost naturally flowed from affection. However, I do think we can adore from a distance without even giving him our affection.

The contrast of a large group exalting the awesome God, and a little child cradled in her father’s arms has captured me since. Though our flesh can be seduced by the adoration of others, our Father doesn’t share the same ego. I know many people who sacrifice the affection of their family for their success in the workplace, but God isn’t wired that way. I think he would treasure affection over adoration any day of the week. He is the God of love, remember!

What touched me most about this exchange between a dad and daughter was that the daughter’s brokenness didn’t diminish the father’s affection. If anything her brokenness made her more endearing. We have the tendency to diminish our worship when we are aware of our own failures and weaknesses. Don’t great crowds of adoration always push the so-called ‘beautiful people’ and the ‘power people’ to the front while shunning to the back those who they deem ‘lesser’? But in a father’s lap there are no greater and lesser. Parents delight equally in their children and only see points of brokenness as vessels into which more love can be poured.

It might interest you to know that Nyssa was adopted into her family. Her parents first laid eyes on her when she was eleven days old and knew her entire condition before they threw wide the doors of their home and invited her in.

Jim told me he was initially reticent to adopt a child with so many special needs. But the moment he first laid eyes on Nyssa, all that changed. “As soon as I had her in my arms,” he said, “she looked up at me and sighed. My heart just melted and I knew I had to say ‘Yes’.”

She was chosen in the same way Father has chosen you, fully aware of all the brokenness he would love you through.

Second, her father reminded me that she couldn’t even crawl into her own father’s lap that morning. If her father hadn’t scooped down and picked her up, she would never have been there. I’m not so certain our plight is similar. Who of us can really claim to crawl into God’s lap by our own power? He is our only source, and there would be no intimacy if he did not make it happen. Perhaps the most we do is just lift our arms to him in surrender and desire. But our place on his lap is all his doing.

It makes more sense to me now, why Jesus asked Peter the question he did after the resurrection. “Do you love me?” He didn’t want to know if Peter adored him, feared him or was ready to serve him in the face of any threat. He just wanted Peter’s love. Having that, he knew everything else would fall into place. Lacking that, nothing else would matter.

Could we dare to believe that our Father sees us the same way as Jim sees Nyssa? His simple delight in us makes all the difference in the world.

Well, it’s no wonder. Ever since that morning, I can’t be in a time of praise without remembering Nyssa and her father, and being reminded of what my heavenly Father wants most from me.

Note: Special thanks to Jim and Jayne Bennett for letting me share a piece of their story. They wrote, “Wayne, ever since your sharing that vision at the conference and these truths have hit me, I’ve started calling Nyssa my “window to God!” She is so precious. I’m an emotional wreck, and yet so happy, safe in His arms!”

A Dad and His Son 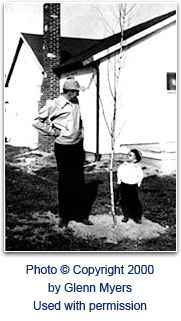 “Everything God is calling me to right now seems wrapped up in this picture,” Glenn told me as he laid the picture on the table.

This is the first time I had been in Glenn and Elaine’s home. We had sat down for breakfast a few hours earlier and hadn’t yet moved from the table. We were talking about the awesome relationship that God extends to each of us through his son.

The photo was carefully framed and matted, an obvious treasure. I could see why immediately as I was captured by the interplay of this father and son standing beside a young birch tree that had already lost its leaves for winter. The stark contrast of the black and white photography and the clothes they wore spoke of a previous generation.

The obvious connection between father and son is profound, and as we discussed it, I thought I could understand why Glenn had seen such a powerful picture in this of the relationship God wanted with him. 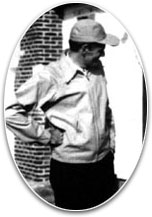 Look closely at the father. He seems to admire his son with great affection, while at the same time he is completely at peace. With his arm casually resting on his hip he also doesn’t seem to have a care in the world. For that moment he
BodyLife – Snapshots of Father’s Love 4 of 5

is simply focused on his boy and fully enjoying the moment fully without rushing onto anything else.

And the gaze back from the son is equally powerful, reflecting many of the same attributes of his father. The admiration in his face is obvious, as is his total pleasure to be hanging out with his dad. He, too, seems peaceful, his hands

resting comfortably in his pockets, seemingly ready to do whatever his father wants. He’s not tugging him along, or fighting for his affection.

The two are in obvious delight with each other and the photo captures so perfectly the joy, wonder, and affection that God wants to share with his children.

“I’m a long ways from that,” Glenn admitted after I had a chance to let the picture sink in, “but I know he is calling me to be just like that little boy.”

I know what he meant, and I felt a long ways from it too–to be so at peace in the Father’s presence, so secure in his care and so ready to enjoy the day with him. It wasn’t long until we both recognized that this wasn’t a relationship God was asking of us, but the relationship he was already at work producing in us by his power and grace. A boy at two can only reflect what he sees in his father. We know love, John says, only because he loved us first. 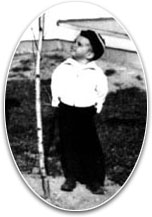 “That’s me!” Glenn finally told me, “the little boy there! I was two years old!”

My head shot up surprised. I had not even considered that this was a family photo.

“My father died within two months of that picture of a heart condition. I have no memory of him, only this picture. Now I want to know my heavenly Father with the same simplicity and joy.”

Me too! Isn’t that the point of everything God has done in creation and redemption? Take a good look at the photo again. What an incredible image that invites all of us to know the Living God like he so earnestly desires to be known with such security, wonder and affection. It would be my greatest desire to start every day like that–looking up at Father to see what he’s up to that day and not to anxious about anything when he’s there!

Note: Thanks to Glenn and Elaine Myers for letting me share something so personal of their life and journey. These photos are copyrighted and used with their permission.

A Girl and Her Daddy!

We Are All Beautiful in His Eyes

The Security of Father’s Love

A Dad and His Son