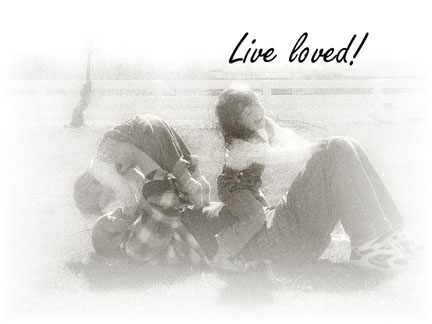 You gotta love the picture! This is how we can live each day of our life in him and if we do, we will be transformed in ways that will astound us.

The family who sent this picture to me had an extraordinary Christmas dinner that I want to tell you about. They live in New Zealand and this Christmas their two youngest children were going on mission trips and some of their older children and their families weren’t going to make it home for Christmas. So instead of having the large Christmas dinner they were used to, they were down to only five people. As they thought how small that would be they felt nudged to plan a larger dinner anyway and go out to the highways and byways and look for some people to invite to dinner. Does this sound familiar? I love this stuff!

So on Christmas Eve and Christmas Day they were on the prowl looking for people that didnâ€™t seem to have any place to be for Christmas. They saw a â€˜scary lookingâ€™ guy in a campervan and followed him to a campsite, where they met his wife. They introduced themselves and said, â€œOur kids away and donâ€™t want to do small. Would you like to come and share a Christmas meal with us.â€ They sound found out they were Aussies and were missionaries to the Aborigines.â€

They accepted the invitation, as did another German father and two teen-aged boys in the same campground. They now live in Malaysia, where their wife and mother was seeing to some Christmas commitments. They came too. They also invited a â€˜social misfitâ€™ from their small village that â€œis a real loner, done the drug/alcohol abuse thing. When they picked her up at noon they also met some cyclists and asked them, but they couldn’t come.

And did we have fun! There’s real humourous rivalry between the Aussies and NZers, ;and so there was a lot of bantering going on. And the German folk had a great sense of humour too. It was just the funnest time! At one stage, we both realised that there were four different conversations all going on at the same time – none was being missed out. We laughed and chatted and ate.

I guess for me personally, was just the greatest thrill of learning to trust Dad in all of this. And I had no obligation of feeling I had to share Jesus with anyone – yes, he did come up a couple of times in our conversation, and that was neat, but I guess it was more just being us and loving others – and all because HE LOVES US!

That night when we lay in bed we were just overflowing with gratefulness to God. He is so good!

The Transformative Power of Living Loved