Hi all! Wow! It’s good to be home after a very busy summer, with some travel to encourage God’s family and some to refresh mine. It is so good to be back in my home for these days. Tons of stuff, however, has piled up. And, while I was gone, we sold out of He Loves Me and have ordered a reprint on a new Second Edition.

I’ve adjusted some wording throughout and added a new Introduction which I’ll include below and a new last chapter called Living Loved, with some practical thoughts about how to actually go out and live this life. As you’ll see below, this is my personal favorite of all the books I’ve written because I am convinced it is the bedrock reality from which everything else springs—including our own personal transformation as well as the relationships necessary for the church to live and work together as he desires. 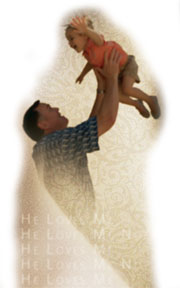 Introduction to the Second Edition

I’ve been amazed at how far and wide this little book has gone since it was first printed eight years ago. I have often said since then that I would never write a more significant book, and I’m even more convinced of that today.

I realize that a book about God’s love seems so obvious that most people would rather plow on to seemingly more engaging subjects, such as New Testament church models, more effective ways to pray, or keys to living in God’s will. God’s love seems like Christianity 101 to most people. Let’s get on to the deeper things, they’ll say. But there is nothing deeper.

Certainly there is nothing more theologically certain than that God is love. We sing about his love in our simplest songs and are comfortable with using the language of love as it relates to God. But in a practical sense, incredibly few believers live each day as if the God of the universe has great affection for them.

Why? Because two thousand years of religious tradition has inculcated us in the mistaken notion that God’s love is something we earn. If we do what pleases him, he loves us; if not, he doesn’t. Giving that up isn’t easy. Moving from a performance-based religious ethic toward God to a relationship deeply rooted in the Father’s affection is no small transition. It was the most significant one I’ve ever made in my spiritual journey, and it turned my life in Christ from a frustrating drudgery in the face of enticing temptations, to a vital, fulfilling adventure that continues to transform me with each passing day. This book describes that process for me, and I hope it can help others in that transition as well.

Some years ago I was asked by a group of elders to teach a nine-week series at a local congregation while they were between pastors. When I asked them if they had anything specific in mind, they told me they had heard I was teaching some fresh things about the cross and would love to hear that. You’ll find most of that content in these pages. I was concerned about doing so, since I knew the freedom of that teaching could undermine what most congregations use to manipulate people to get involved and serve.

“Let me ask you a question first,” I responded. “Just how much do you think gets done around here because people would feel guilty if they didn’t do it?”

I was surprised when one of the men answered, with a laugh and a shake of his head, “Probably ninety percent!” The other laughed too, but in the end agreed that it might be something like that.

“Well, if you’re right,” I told them, “and if your people have a revelation of the cross, then ninety percent of what’s getting done around here will stop. I want to know if you’re okay with that?”

The laughter ceased. They looked at each other unsure how to respond. After some hemming and hawing, they finally agreed that they would be fine with that. You’ve got to admire their courage. So I agreed to come.

Unfortunately, however, that was not the outcome. Either I didn’t teach it well or they didn’t listen as well as I hoped, because at the end of our time, they hired a new pastor who came talking the language of guilt and performance. I was saddened that the group as a whole didn’t seem to catch on, though I am still in touch today with some of the individuals in that group who were deeply transformed.

The pull of religion can be far stronger than the freedom of relationship. I can’t tell you how many times I’ve shared these things only to be faced with someone who honestly believes that God’s love alone is not able to transform people. Instead, they argue, we have to give them a hefty and consistent dose of God’s fear and judgment to keep them on the straight and narrow.

It’s tragic really. Those who are willing to substitute the demand of obligation for the power of affection have not tasted the latter in any significant measure. I have observed all over the world that those who discover the depth of Father’s affection for them and learn to live in it will find greater passion for Jesus, freedom from sin, and be more engaged with the world than anyone driven by religious obligation.

What the Father showed us in the gift of his Son is that he was unwilling to settle for the indentured servitude of fearful slaves. He preferred instead the intimate affection of sons and daughters. He knew love would take us deeper into his life than fearful obligation ever would. It would teach us more truth, free us from our selfishness and failures, and make us fruitful in the world.

Since I published this book I’ve heard from hundreds of people who have told me that God used it to transform their own journeys as well. Many told me that I had put into words something they knew deep inside was already true, but they were afraid to believe it. Others have said it completely redefined the life of Christ for them and sent them on an amazing journey mining the depths of that love and affection.

I hope you too come to the end of these pages convinced that he loves you with a deep an unrelenting affection. Nothing fulfills his purpose any more than to reveal that love to you until it overwhelms you, then transforms you, and then leads you through the rest of our life as a reflection of his glory in the earth.

That’s why he made you, and I hope why this book has landed in your hands.

Beyond Sundays Releases This Week

He Loves Me, Second Edition

4 thoughts on “He Loves Me Redux!”