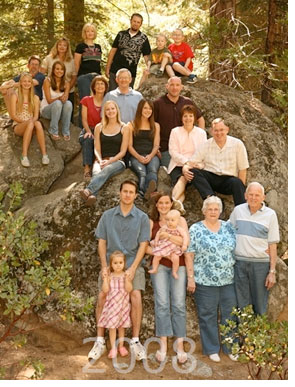 A few weeks ago almost all of the extended family on my side of the family got together for a reunion in honor of my parents’ 60th wedding anniversary. We gathered at Shaver Lake, California where my parents live. That’s the mob to the left. We had a great time together in the Sierras and though it was a bit of a task to get us all together, it was well worth it.

Given the the pressure on relationships in our day, it is quite a treasure to have parents who have found a way to stay together that long. Our family is far from perfect and we have our share of ups and downs, but overall we have a deep and abiding love for each other that becomes more precious with the passing of time.

But I realize that isn’t true for everyone. Some families involve very broken people who are not free to love even their own children in a way that even older children desires. A few weeks ago a man wrote me about a desire to reconnect with his dad even though their relationship had been estranged for some time. He had experienced some healing in his own life and wanted to see if that could extend to this father as well. We shared about the process for that and I warned him about not having any expectations about how his father might respond, or he’d probably come away disappointed. Here’s what he wrote me a couple of weeks ago. I share it here with his permission.

I met with my dad. We hadn’t seen each other in over four years. I was able to offer him love in a way I never have been able to before. In the past I could only love him out of my brokenness which demanded certain things from him. This time I was able to offer my love out of a heart that is being healed. And I realized what a tough man he is to love. Honestly, for the past four years I really didn’t miss his caustic, cynical personality, one that is quicker to make enemies than friends. But I’m stepping into this, moving towards him, offering him my love and honesty. And I was able to tell him that I don’t have any expectations of him, of how I would like him to respond. The lines of communication have been re-opened. And in the end he thanked me for reaching out to him and he told me that he loves me.

An interesting side note is that I have befriended our neighbor who is the same age as my dad and who lost his wife of 45 years. He would have people stop by from local churches who would attempt to console but would end up preaching at him. He would kick them out. I just tried to love him and be there for him. This was two years ago. He has since given his life to Christ and is a new man! And I have been able to play a part in helping him reach out to his adult son and reconnect. That’s been an amazing journey to watch, since I’m now seeing it from a father’s perspective. Here is a 70 year old man who used to be tough as nails (marine in Vietnam, cop, etc) and now is a humble, gentle and broken man. He tears up when he talks about his son and how he longs to be a friend to him. And he always hugs me and tells me I am his best friend. Pretty incredible stuff.

The Father has revealed and healed so much in my life, exposing all the lies I believed about events that happened to me when I was younger that I had no control of. These lies then formed the foundation of my beliefs—about myself, others and the Father. God, in His kindness, has taken me (and continues to take me) on a journey of exposing the lies, deconstructing them and then speaking His Life and Truth into the situation. He is in essence reframing or reinterpreting those events. And since He is outside of time, he is taking me back to those events and showing me that He was there, even though I didn’t acknowledge His presence at that time.

I love it when people who are being loved, grow in the freedom to share that love with others. It reminds me of one of my favorite passages from THE SHACK:

Mack, if anything matters then everything matters. Because you are important, everything you do is important. Every time you forgive, the universe changes; every time you reach out and touch a heart or a life, the world changes; with every kindness and service, seen or unseen, my purposes are accomplished and nothing will ever be the same again.

Healing Beyond a Daughter’s Suicide

10 thoughts on “A Force For Healing”