During my recent trip through the Carolinas I met hundreds of people hungering to live in the reality of Jesus. We had all kinds of conversations with people all over the spectrum of expressions of church life. As part of my time in Charlotte, I was asked if I could meet the family of a man Sara and I met in New Zealand three years ago. He has a daughter, son-in-law and eight grandchildren there. We made arrangements to meet at his office, in the Billy Graham Evangelistic Association. We were going to get a tour and go out to lunch.

Unfortunately the man who arranged it all had to cancel because of sickness in his family. But he wanted us to take the tour anyway, so my hosts and I did. We got the full tour around the place, which is an incredibly opulent facility in Charlotte. Later, we also toured the Billy Graham Museum (pictured at left). As many of you know, I’m not at all convinced we should glorify a man like the world does especially when the life it celebrates was mostly about Jesus and his kingdom. I’m glad we don’t have the Apostle Paul Museum for instance. It might be interesting, but it gives glory to the wrong thing, doesn’t it? That’s not to say Billy Graham has done some incredible things and maintained a life of integrity in a time when such seems to be in short supply with those who are in the big spotlights.

In any case, back to my tour in the offices themselves. At one point we were in the photography library when one of their workers asked if we’d attended any of his crusades. When I told her I had gone forward as a nine-year-old boy at the Billy Graham crusade in Fresno, CA in 1962, she told me she might have a picture of that. Sure enough, she found a photo (see below) of the end of one of those evenings in Fresno. 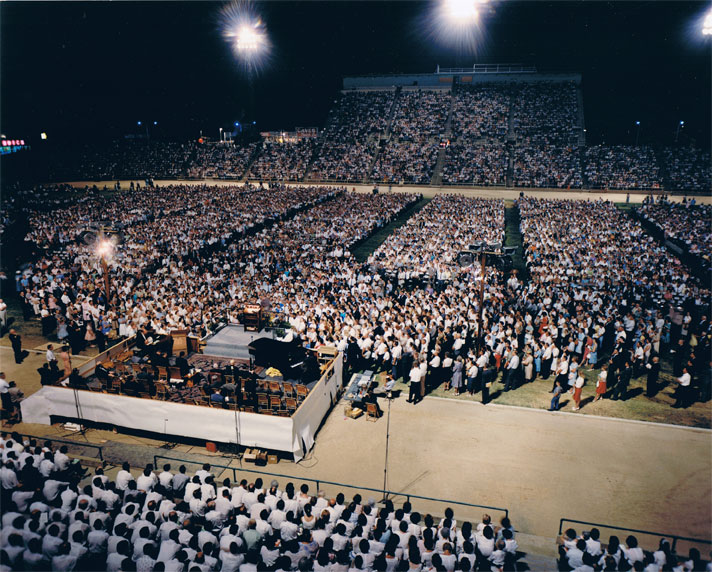 As I recall my dad was an usher, way up at the top of the tall bleachers on the right hand side. It’s amazing how vivid the memories of that night still are.

Forty-six years ago, who would have known what Father had in mind for me? I remember wanting to go forward the first night of the crusade, but my dad thought I was too young. The second night I was so overcome during the invitation that my dad said it must be time. Having grown up around the Gospel all my life, I know I believed in him before that night. But that was my first willful act to give my life to him.

Tomorrow I turn 55. What a journey it has been! Who knows what still lies in store in unfolding days to come. I’ve never regretted selling out my life to Jesus at a young age. Certainly I had no idea what it meant at the time, and how much I would be stretched at times to stay true to that decision. But I have never wavered in my passion to know him and my willingness to follow him even if that meant I had to disappoint others who didn’t like or agree with what I felt he asked of me. But in the end, right or wrong, I kept trying to follow him even when it cost me.

And I’ve no doubt I’ll continue on that journey to the end of this age and through the ages beyond. It’s been fun to reflect back on my childhood, the choices I made in the face of how he made himself known to me. I’m so grateful we connected early and often.

And I want nothing less for you too! Blessings!

The Businessman and the Beggar

Our Israel Trip Had to Change Dates!

12 thoughts on “A Flash From the Past”