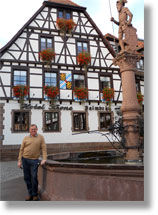 I am barnstorming Germany at the moment. I took a long, restful train ride through the countryside yesterday from Hamlen to Nuremberg. What a beautiful country this is! Except for that brief respite, however, this has been a grueling trip because I am having less than 24 hours at almost all of the stops I’m making. One day is not enough time to really get to know people and get to the important questions that help us sort out what Jesus is doing in individual lives. I’d never schedule a tour myself like this because it is so frustrating not having time to get past the curiosity questions and share more deeply. But this is what I have.

Today I had a bit of a break and went down to see the parade ground where Hitler held his public rallies. We toured the museum there and learned how he built his power over people by marginalizing, excluding, and even exterminating anyone who didn’t show a passion for his rule or tactics. It was sobering. So much of the language we heard was similar to what’s going on from those inside organized religion who want to challenge anyone who dares to question its authority, methodology or effectiveness of teaching people how to live in Father’s love.

What I have enjoyed about the trip is not only those in their 50s and 60s who have found fresh life in Jesus, but also the number of young people here who are passionate about a greater life in Jesus. They are not so much burned out by the rituals of religion as much as they are hungry to know an authentic life in Jesus that they didn’t find there to begin with. In every meeting I’ve been to there has been young, hungry, engaged men and women who are looking for what life in Jesus is really all about. It has been so encouraging. The Spirit is calling to a new generation to come to him in the freedom of simply learning to live as the Father’s children in the earth and not get lost in the religious activity of generations that preceded them. Amazing!

This is what we must encourage not discourage. If you care about God’s church in the earth you will discourage them or try to bring them into conformity with our tired religious practices. Interestingly enough, I received this email over the last couple of days from Becky back in the States that seemed to address this very thing:

I’m a 23 year old Christian who left “the box” 2 years ago. I was raised in church and after witnessing 3 pastoral affairs and 2 church splits, I threw up my hands and walked away. If that was God, I didn’t want Him. I didn’t know what to do. My decision to leave the church was against everything I’ve been taught here in the Bible Belt, but at the same time it was a decision that felt as right as choosing God in the first place. Interestingly enough, I had my first real and authentic conversation with God after I left the church. Although it was mostly filled with anger, it was the first time I allowed myself to be real with God. I spent my entire life in this passive aggressive state because all the formulaic prayers and activities didn’t lead to the life the Bible talked so much about. It seemed no matter what I did, I couldn’t feel alive and whole like the Bible said….

Reading The Shack last year changed a lot. I have never felt such a sense of relief after reading something. If that God is who God really is, THAT’S a God worth worshipping! I no longer had to be someone I wasn’t in order to love Him. What a relief. And although I feel confident in my decision now more than ever, I still often struggle with it. If this mindset is true, then why is it a 23 year old in 2008 was the first to figure it out? And that’s where you come in…. I’m starting from the beginning on your podcasts and plan to listen to them all. I just have to say thank you. It’s nice to know people older, with much more wisdom, education, and experience feel the same way.

I hear this so often from people. Who am I to think that these systems might be leading us astray? Wouldn’t those who are more intelligent or more experienced see it before I do? And if people don’t put that on themselves, those who set themselves up as leaders will do it for them. I can’t tell you how many people have faced a dismissive attitude from an elder or pastor with the same comment: “Who are you to think you can hear God better than me? If God were speaking those things today, wouldn’t he say it to me first?”

My answer to Becky would be, “Why not you?” Why not a twenty-three year old girl who simply wants to know Jesus? When Jesus was here he was excited when the simplest people captured the vision for his kingdom. He greatly rejoiced before God at such moments, grateful that God had revealed himself not to the wise and learned who were so busy trying to keep people under their authority, but to common people and children.

Wouldn’t we want to ask ourselves why our so-called leaders discourage what Jesus so blatantly affirmed? I wonder.

So, why not Becky? She is his—beloved daughter of the Most High God. He knows where she is and how to bring her along to where he wants her to be.

Why would God show her what others have missed?

Maybe it’s because her simple heart is unclouded by the need to build a group of people into an efficient organization. Maybe it’s because she doesn’t draw her salary from the success of her program and ideas. And maybe her vocational success isn’t tied to corralling a group of people under her control. If the truth be told most of those leaders who discourage people like Becky one day began with a heart just like Becky’s before it got confused by the obligations of building a Christian organization.

I don’t know about you, but I’d rather rejoice with Becky and encourage her to keep going. Keep coming to him and follow him as best as you can see him. Feel free to make some mistakes in the process and he will teach you how to live in his freedom and his glory.

“You Do Know You Can’t Do This Without Jesus, Right?”