These two letters come from brothers I know personally and i thought their stories might be an encouragement and help to others. I know that God does not have a process for this kind of freedom that fits everyone, so please don’t assume you can just do what the’re doing. But hopefully they will encourage you to look to Father as your source of life and freedom in this struggle:

Nice opening shot on the whole sexuality thing. As you know, this has been a struggle for me over the years. Institutional churches usually do such a miserable job, and there are so few resources out there. I don’t know how others handle it. As for me, it has now been 7 years of concerted effort–counseling, prayer support buddies, small-group work/12-step stuff, etc. Things are much better, but the temptation–and “failures” remain.

The biggest obstacle is succumbing to the dirty feeling and allowing it to drive you from God and other people. Your book, He Loves Me, has been an immensely valuable resource to me and other men I know who struggle with this issue. Men struggling with this must know the truth that God’s love for them is bigger than their own feelings of failure. Men must choose to believe and accept this love. It is then that they will be able to demonstrate the paradox of “strength in weakness” that Jesus talks about.

Finding Freedom in a Long-Term Struggle 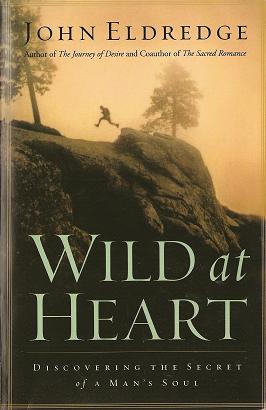 I’ve been working through a book with two of the men in our group. We’ve been going through Wild at Heart by John Eldredge. My brother got it for me for my birthday and I looked at the first chapter and put it down because it seemed like another “Christian self-help” book extolling the wonders of the religious system. My wife looked through it and said there was some really good stuff in it. My brother kept asking if I’d read it yet and since it was important to him and my wife said it might be good, I started it.

I started reading it on a flight back home from a business trip and while reading into the third chapter it seemed like God just started speaking to the empty areas of my life. I started crying on the plane and then wrote my wife a five-page letter just sharing my heart with her. I’ve since been meeting with two older brothers that are more like father figures for me, and we’ve all been walking out what it means to be masculine in the heart of God. It seems like almost every week more and more of Gods call for my life is being revealed and understood. The way I view women and especially my wife has changed dramatically as well as the way I parent my children.

There are a few places where the author talks about pornography and why it’s so powerful of an addiction for men and I must admit that, at least in my life, he’s nailed it.

In another chapter….”Why is pornography the most addictive thing in the universe for men? Certainly there’s the fact that a man is visually wired, that pictures and images arouse men much more than they do women. But the deeper reason is because that seductive beauty reaches down inside and touches your desperate hunger for validation as a man you didn’t even know you had, touches it like nothing else most men have ever experienced.”

And finally….”Pornography is what happens when a man insists on being energized by a woman, he uses her to get a feeling that he is a man. It is a false strength, as I’ve said, because it depends on an outside source rather than emanating from deep within his center. And it is a paragon of selfishness. He offers nothing and takes everything.” The question of “Am I a man? Do I have what it takes? “If he can feel like the hero sexually, well, then mister, he’s the hero. Pornography is so seductive because what is a wounded, famished man to think when there are literally hundreds of beauties willing to give themselves to him. (Oh course, it’s not just to him, but when he’s alone with the photos, it feels likes it’s just for him.)”

All of these passages opened my heart and eyes to what has been going on for so long in my life. In your response to the young wife you said “For a man it is the catalyst for a cheap, momentary sexual thrill, and not much more.” But in my life it’s not been just a cheap thrill but so much more. It’s been one of the things that I’ve turned to feel like I’m somebody, that I’m loved by someone. I’ve known all along that it was sinful and NOT the answer, but when you don’t know how much God loves you and trust him to bring you life, you go to what you know works.

My earthly father is a passive, weak man, who’s never ushered me into genuine masculinity. I’ve never known what and who God’s called me to be so I’ve been looking. Looking into everything from being a great drummer on a worship team, to a great employee at work, and when I got married, the best husband and father. But of course, when all of those ambitions failed, there was always my fantasy women who would “comfort” me. Who would make me feel alive again!

It seemed like the compulsion to masturbate was strongest after having a big fight with my wife. I’d run off, either out of the house or simply to the bathroom and I’d either feel like a failure or be so angry at her for not loving me that I’d fantasizing about women who did love me and wanted me for the person I was or who I wanted to be. Pornography is so powerful because it offers a generation of men whose masculinity is under assault by the world, the enemy, and even the church, a way of “feeling” like a man.

It’s also so damaging. I’ve objectified women and especially my wife most of my life. I haven’t been there to offer my wife my strength as a man and husband but instead looked to her to fulfill it in me. I’m so blessed that she’s still with me. What an incredible woman to put up with a sex addict and an alcoholic for over 13 years. I’m happy to say that we’re actually moving toward each other in relationship and it’s a joy.

I’ve been experiencing freedom from the addiction more than I ever had and it’s been through understanding that I am valuable to Father, that he has an adventure for me live, a battle to fight, and a beauty to rescue. That I’m a warrior in his kingdom. That his love for me that is powerful. It’s also helped to have a couple of brothers I can talk to. One of the brothers had an affair as a pastor and being able to share my struggles with someone who’s been there and can empathize and help walk through finding Father has been invaluable.

A Couple Struggles with Pornography