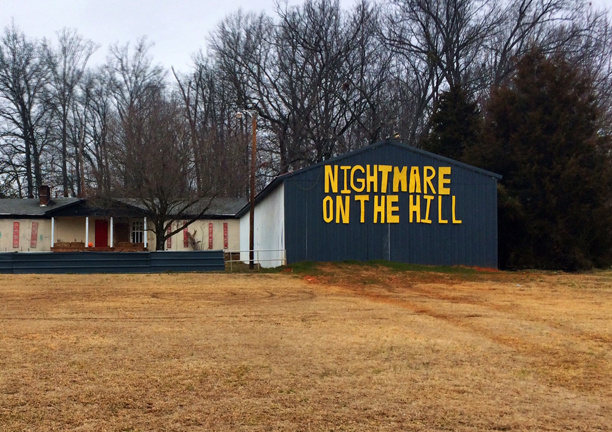 I’m just taking a quick stopover in Chicago on my way back home today.  After 11 days in the south and zooming past hundreds of congregations with names that conjure up images of peace and tranquility while at the same time hearing a constant stream of horrors stories about the way people were treated by those who claim to represent Jesus in the world, I’m finding myself wishing that congregations were subject to truth-in-advertising laws.

I thought of that when I saw the picture above.  I first thought it was a congregation with a bold sign on the exterior.  Until I read it.  And then I busted out laughing.  No, it wasn’t a local congregation but a left over from a Halloween haunted house.  But Nightmare on the Hill might be an appropriate name for many of the congregations whose former members and leaders I was with over the past ten days.  Just because something calls itself a church, doesn’t mean it bears the image of Christ to the world, much less to its own members.

If you just attend a service on Sunday, you may not be aware of all the intrigue going on behind the scenes—of lies and betrayal, of tribunals to accuse those who simply ask questions of insubordination and rebellion, of insults, exclusions and lies that would make Machiavelli cringe in shame.  Proclaiming themselves an oasis of love, they manipulate people in God’s name to great harm and destruction.

In what world would a congregation influenced by legalism and mocking other Christians who see the world differently call itself Grace Community?  Or, how can a local pastor who has broken numerous laws and defrauded his people and community of money for his own gain, still be supported by a denomination that claims to be a reflection of Christ’s glory in the world?

Last year someone told me that they were in a contemporary fellowship and were handed a folder that included the order of service and announcements for the week, but in bold type across the top of the first page declared, “This is not a bulletin.”  In what world can you deny the obvious and people believe you?

Religion, just like politics, is notorious for using language to hide what’s true.  It is filled with double-talk and demands for unquestioned obedience because it isn’t what it claims to be.  If you want to go on this journey you have to ask God to let you see things as they really are.  Just because a group calls themselves a “church” doesn’t make them one.  When the Pharisees claimed to be children of Abraham, Jesus corrected them.  “You belong to your father, the devil, and you want to carry out your father’s desires….  When he lies, he speaks his native language, for he is a liar and the father of lies. “

Let’s call things what they really are.  What calls itself Grace Community might actually be a nightmare on the hill.  And if it is, then run from it.  Run as fast as you can.  There is life beyond it.

The joy of this trip has come in meeting some incredible people who have escaped the orbit of such institutions to find a better journey in a growing relationship with the Father of affection.  He is walking them through the pain and betrayals to see him more clearly and to love others more freely.  We were warned after all that religious leaders would treat us the same way they treated him.

And Jesus still triumphs over them by leading us on a better journey and discovering that despite the failures of people, his church is still growing in the world.

The Secret is Out!

CHURCH REFUGEES Could Be A Game Changer

Stupid Things Said In the Name of Jesus

8 thoughts on “Nightmare on the Hill”