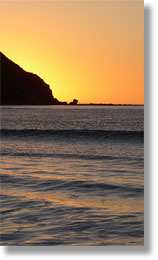 At left you’ll see the Thursday evening sunset we witnessed on a beach west of Wellington. Since then we have journeyed south, first by Ferry across the Cook Straight through a giant pod of dolphins to the South Island. From there we drove by car across some amazing countryside and then along the coastline down to Christchurch. We will weekend here and then head inland to Faerlie for the remainder of our stay. Sara and I fly home on Thursday.

One of the constant themes of our fellowship throughout New Zealand has been the wonderful things that God has done as people simply followed their heart instead of listening to the detractors and naysayers. We heard a lengthy story by a woman whose father had abandoned her and her siblings to alcohol and a mother who had been so overwhelmed with her small children she turned them over to an orphanage and vanished. Decades of anger however yielded to the Lord’s working and she told of the way God had led her to reconciliation with her father when he was dying and with her mother when she was 70. Each time a specific direction in her heart and the willingness to follow it opened doors she had never imagined t

We also talked to another woman who had made some incredible decisions not to use some incredible material to advance her own name or websites. When I asked her why she hadn’t more clearly linked her name to it, she said that it just didn’t feel right.

We also met a group of people who had recently been pushed out of a fellowship they had helped to plant because they began to ask questions about tithing, leadership and covering that made their long-time colleagues reject them as rebellious and spread gossip about them over a wide array of past friendships. Even though they have been castigated for it they have followed their heart instead of giving in to the pressure and manipulation of others.

God does incredible things in folks who simply follow their hearts. Unfortunately our religious systems rather than teaching people how to follow what God puts on their heart, actually teach them not to. Those who lead them talk about the heart being desperately wicked and that they need confirmation from their leaders before stepping out. Unfortunately, however, what God often puts on our hearts will not fit easily into human systems, and those who lead them will rarely be able to affirm what God has asked them to do. By teaching people not to trust what Father puts on their heart, they rob them of the adventure that will help them know him better and lead them to some incredible experiences.

“Don’t you think God would show that to us if it were true?” I’ve heard of that question asked a lot when people sense God leading them in a direction their so-called leaders don’t like. It creates the false notion that people following their heart are arrogant people and lack humility. But God wants us to learn how to follow his leadings in our heart, even if others do not agree. It doesn’t mean we’re always right, but that we will learn in the following. Yes, I know people who constantly write God’s name on their own agenda, but that simply becomes known in time. The early apostles taught believers to ‘believe what they hear’ and not allow anyone else, even them, to undermine the leading of their conscience.

It’s a wonderful lesson for us all. Follow your heart and don’t worry about making mistakes, because God can use those as well. And remember, those who know Father will encourage you to listen to him, not discourage you in their attempts to get you to follow them.

That Lot in Fairlee

The Heart Of Relational Church