I wept yesterday. I shed more tears than any day in recent memory. And, quite frankly, I was surprised by it.

Since I was in Kansas last week, I had little opportunity to follow the services and ceremonies for President Ronald Reagan. Sara taped them for me and I spent almost all day yesterday watching the celebration of his life and legacy and the mourning of his passing. I was surprised at the emotional reaction I had to all of it. I had wanted to watch it because of the historical uniqueness of a President’s passing, and the fact that his Presidential library is only a few miles from where I live.

Though I voted for President Reagan in both elections, and supported much of his agenda, I have not thought of him as one of our greatest presidents. As time marches on, however, he may prove to be the greatest in my lifetime, which alone says volumes about the times in which we live. No, my tears did not flow today because of a personal sense of loss at his passing. I wept for other reasons. 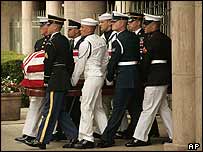 I am sure I wept a bit because my emotions were manipulated the pageantry, images, and music of these ceremonies. They are designed to do that, you know. Many of the songs of faith pulled at my heartstrings and          the simple power of military protocol and patriotism makes a powerful mix. But I also know it was far more than that.

I wept in memory of a President I respected and whose ideals of freedom and courage of his convictions inspired me personally and set a new tone in American history. I always admired his amazing gift of communication, his graciousness toward opponents and his quick-witted humor.

I wept in grief for his widow, Nancy. Their deep and abiding love had been first robbed by disease then severed by death. Her pain reminded me of so many other friends and family past and present waging war against horribly debilitating diseases in others they love deeply. It also made me appreciate Sara so much more and the gift that she is to me.

I wept for the mortality of the human soul and the suffering of a world in conflict, disease and death that has too-long embraced an order that is grossly out of synch with the passions of the One who created us all.

I wept in gratitude for significant people in my own life who have preceded me to the presence of the Father I love so much.

And perhaps most of all I wept in sorrow for the demeaned image of God presented before the world in the trappings of a lofty cathedral and in the presumption of dress and ceremony by the religious professionals who took part in the service. These things were designed to make the rich and powerful comfortable in religious moments, rather than bear the glory of God to the weak and wounded of the world. I thought those things made Christianity look weak, powerless and empty—a God whose veneer we invoke in our sorrow, not a Father whose love we can embrace every day.

And I wept in wonder at God’s graciousness to visit people in such places and behind such trappings. In spite of the over-done pageantry of religion his voice could be clearly heard in the simple words of those who expressed their own faith and that of President Reagan’s especially following his assassination attempt.

And I have awakened to this day with a deeper love and a firmer resolve to live deeply in Jesus, following him wherever he asks me to go, as long as he gives me breath in this body.

Into Ever Wider Spaces

In the Shadow of Death, Part 4

Lifestream #3: How can I live in increasingly trusting Jesus?

Placed in the Hearts of Others

4 thoughts on “A Day of Tears”