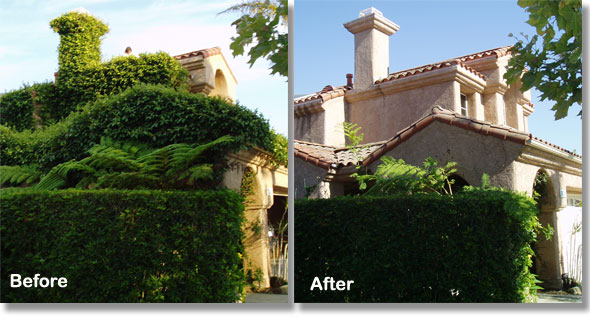 Many of you know that Sara and I moved a few weeks ago, to a house that I wasn’t impressed with at first sight. I could see a number of things that gave me concern. But where I saw problems, Sara saw potential. So we bought the house and moved in. In the weeks since, however, we’ve been exploring that potential. Now I know what potential means. It means LOTS OF WORK AHEAD!

The two pictures to the left represent before and after this week. Fully 1/4 of this two-story house was covered in ivy that had grown for 15 years. This week as part of exploring this house’s potential, we took it all off. Now, you might think it was pretty before, and it was! The ivy was gorgeous, but it is a nesting place for termites, a ladder for rats into the attic and a bottleneck for moisture to rot away the house. I’ve learned often in this kingdom that there is little connection between pretty and fruitful!

Tearing off the ivy and untwisting it from beneath the tiles was no easy chore. (By the way, if you look at the little dot in the first picture, just to the right of the ivy-covered chimney, you can see Sara hard at work.) We spent evening and most of the weekend getting it all off, and cleaning out the gutters that were packed with branches one and two inches across. They had to be removed almost inch by inch. We were worn out by the painstaking work it took to unleash this house’s potential. (And this is just one bit of it. I won’t tell you about the backyard excavation so Sara could turn the desert look into an English garden.).

Between moments of frustration where we vented at the former owners in abstentia who let this thing grow into such a monster, I was constantly reminded that change, even spiritually, doesn’t come without work. If we think freedom is living comfortably in the status quo, we’ll find our lives falling into greater disrepair. Living the life Jesus has called us to live doesn’t happen without intentional action on our part.

Those who misunderstand that, will not see the changes in their life they seek. There is one problem here. When we speak of action, most of us only know the self-effort of legalism that tries to earn his graciousness. First, we must learn that that never works. As we find that freedom, however, we must take care not to fall into the ditch on the other side of the road—lethargy.
Since so much of our effort was the self-effort driven by guilt or fear, when he frees us from those things, we don’t know how to respond.

But he wants us to go on and learn the joy of working alongside him as he invites us to actively follow him day by day. This activity is not an attempt to earn his love or to cover up our sin, it is the only thing that love for him will want to do. Those who find life in this journey discover how to intentionally follow him as he invites us onward. Sacking out on the couch won’t get it done. It takes intentionality to put off the old man and to embrace the potential God sees in us. Yes, that means work, but this work is a joy. It responds to his leading and goes forward on his strength. Each day the disciple takes great joy in asking, “What are you asking of me today?” And then when God makes the way clear we intentionally follow him, even if there is hard work to be done, so that we can feast on the fruits of his work in us.

In Celebration Our Offices Are Closed This Week

How Do We Know that We Are His?

We Have Completed the Work…

12 thoughts on “Potential Is A Fancy Name for Hard Work!”