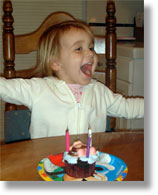 That’s our granddaughter Aimee (on the left) last night as we went over to help her celebrate her third birthday. It had been a tough day for her. Since her new baby sister arrived she has been missing the ‘mother time’ she had gotten used to as an only child. I’m not sure she thinks Lindsay Grace (that lovely little girl on the right) is such a blessing at the moment. But we came over, brought her some balloons and shared some cake and ice cream with her, and she lit up like the candles on the cake. This picture of that event reminded me of something I’d read earlier that day in Genesis.

After the world had turned so evil that God had to purge it with a flood. After the waters and receded and Noah and his family had left the ark, God spoke to them (as Eugene Peterson translated it in The Message.):

Whoever sheds human blood,
by humans let his blood be shed.
Because God made humans in his image
reflecting his very nature.
You’re here to bear fruit, reproduce,
lavish life on the Earth, live bountifully!
Genesis 9:6-7

It was the last part that startled me. After his warning about not taking the life of a fellow human because they are made in God’s image, he tells Noah to live fruitfully and bountifully. Just after so severe a judgment, I would have thought God would tell them to be careful and live more righteously. While he still made clear that violating others is so against his nature, he still wanted them to enjoy the bounty of this earth and enjoy the life he gave them. Is that also what it means to live righteously?

I do think that’s the point. God gave us life to be enjoyed. But it is easy for us to focus so often on what we don’t have and forget to enjoy him in the midst of what we do. And it’s easy to be overwhelmed with all the need in this world, where sin, sickness and death have robbed people of life and to feel guilty about whether or not we’re doing enough to help others or enough to right the injustices perpetuated on others. An unhealthy preoccupation with those things robs us of the ability to celebrate him the midst of our lives. Part of living righteously is not just embracing God’s holiness, but also embracing his creativity and to live bountifully in whatever God has given us today.

Certainly at the same time we can openly share with others and play the part he’s asked us top lay in relieving the suffering of others. But we do so because we realize that whatever impinges on our freedom to enjoy God in his creation is also part of the fall. Sin causes robs us of the joy in life that he has given us and focusing on need all the time can be exhausting and bring us no closer to him.

No wonder Jesus spent so much time celebrating the richness of his Father’s life, whether at wedding feasts, dinner with his friends, or parties with sinners. That enjoyment is also part of his Father’s righteousness. And it isn’t just for those who have a lot. I’ve seen little children in desperate poverty play and laugh with joy in their little games. I remember back to the early days of our marriage, when we had almost nothing. Everything we owned was in the trunk of an Oldsmobile Cutlass and we came to California to strike out on our life together. In those more simple times we were blessed just to have each other and a life ahead in God. 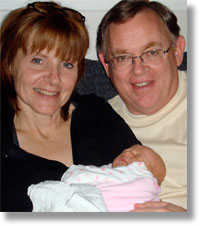 So don’t forget to live bountifully, not just one day a year, but as a regular part of life. Do it in the joy of pleasant and abundant circumstances, and let him teach you when life’s brokenness meets you head-on. I was in a hospital this morning with a good friend whose wife was undergoing surgery this morning to remove a tumor that may be malignant. Certainly their challenge is great in this season, but his joy can still be known in the middle of such struggles. Maybe that’s where our fellowship comes in as others rally around those who are carrying a heavy load and help them with it.

Stateside tomorrow we’re celebrating Thanksgiving Day. There is so much that Sara and I have to be thankful for these days and with great relish we will share it all with the God we love so deeply. And we want to send our Thanksgiving greetings on to others who are celebrating as well, and to all those of God’s family throughout the world. Even in the midst of great tragedies our Father makes his life known. Even learning to share in that joy is part of his gift to us in a broken world.

Look at that little girl’s picture at the top left. With such exuberance and joy her arms are open wide and her face filled with joy. That’s how I want to be with my Father today—and every day he graces me to do so!

Living In The Father’s Delight