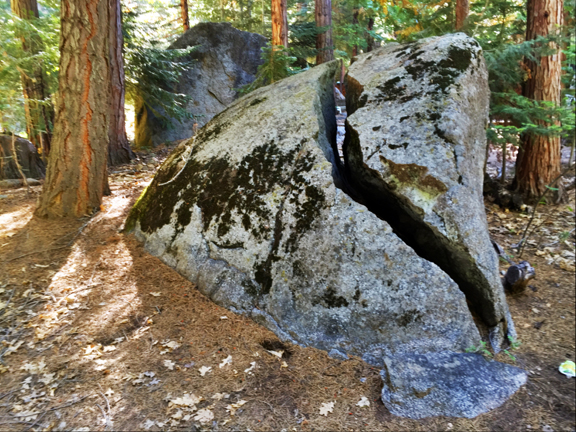 On a hike the other day in the Sierras, I thought I’d see just how dry California really is. So, taking a page from Moses’ book I spoke to the rock. I could split it in two easy enough, but as you can see in the picture above, I wasn’t able to ge the water flowing.  Man, that’s dry!

Seriously though, we’ve had four years with less than half of normal snow and rainfall and our state government has not built any new water retention projects in the last 50 years despite a constantly growing population. The combination of this weather cycle and government shortsightedness means we are in a state of crisis with many resevoirs bone dry or nearly so. Our underground aquifers have been pumped to depths never before seen.

To help, we are under severe water restrictions. Yes, we have enough to drink and to take shorter-than-average showers. Many continue to water lawns, though the price of water above the allotment can get expensive very quickly.  But the immediate threat is from our tinder-dry fields and forests, which can explode into raging wildfires in an instant and have in many places. Fortunately none are burning near us at the moment.

But there is lots of talk of a strong El Nino forming in the eastern Pacific, which could mean a wetter-than-normal winter. Some are calling it a Godzilla, with the potentional to bring torrential rains, which might cause mudslides as it did in 1996.  Who knows? We need about three winters like that to replenish California’s water supply, but at what cost?

It’s a strange time to live in California when earthquakes seem to be the least of our troubles!

The Mission Continues in Pokot

Is It Summer Already?