Kent and I are at the airport waiting for our departure. What a trip this has been! We’re excited to get home to our families, but we leave some enduring memories and new friendships behind, as well as a piece of our hearts with the people of Kenya and the incredible challenges they face.

From Kitale we went to Butere for a four-day conference with people from the Western Region. We were told later that people from America don’t venture out into these places. You could tell by the faces of the people and the children that two white people were indeed oddities here. 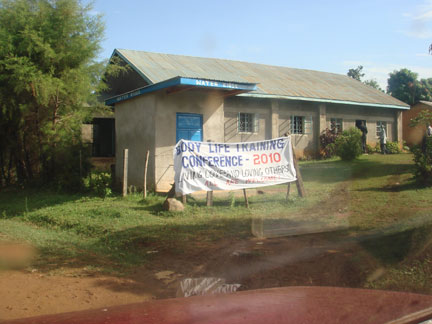 Arriving at the conference site in Butere 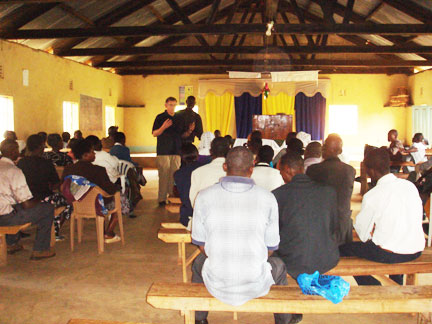 Wayne sharing with the people at Butere 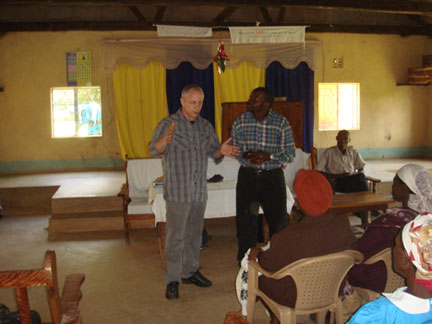 Kent didn’t do much sharing, but when he did the people really listened. Seeing a hair-dresser talk so freely about his journey and seeing his ministry as one-on-one with his clients really touched them.

It was an amazing time. The people came in deeply oppressed, expressionless, looking like they’d come to a funeral, or at least another person from America telling them how they were failing. But as Kent and I began to share about Father’s love we watched a miracle take place. Oppressed expressions gave way to skeptical looks, then to hope, and finally to embracing God’s love for them and they began to laugh, ask questions and celebrate a rich heritage they hadn’t realized was theirs.

We often has to stop the meetings because the rain pounding on the tin roof was so loud we couldn’t hear each other. That gave us time to engage people individually. 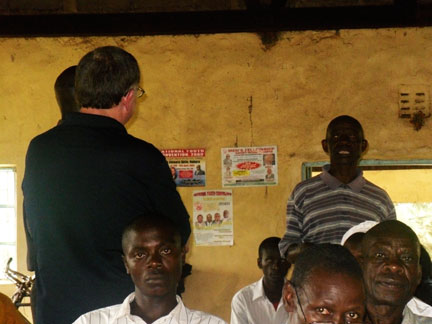 Answering questions and engaging people’s own journeys with God’s love. 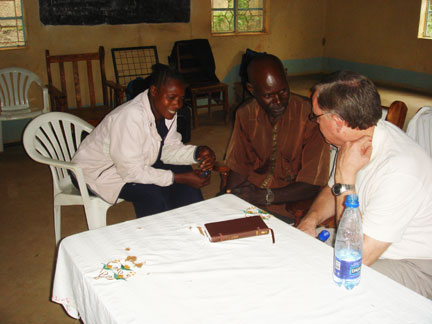 Personal conversations during our rain breaks.

After our time at Butere, were off on the infamous Kenyan roads. What a terrifying adventure with really bad roads, speeding drivers, and the twists and turns to avoid potholes, pedestrians, and other traffic. Really crazy, but we had some superb drivers. 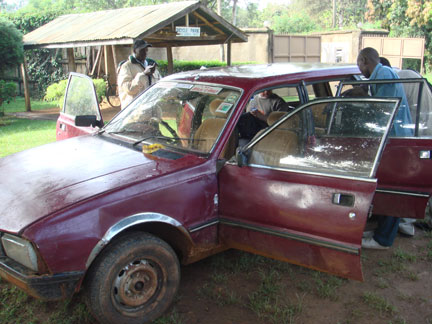 Old Faithful, the red car that took us all over the western region of Kenya. It is old and held together with bailing wire. We even had to stop to pick pieces of it up, and more than once it was parked by the side of the road with the hood up. 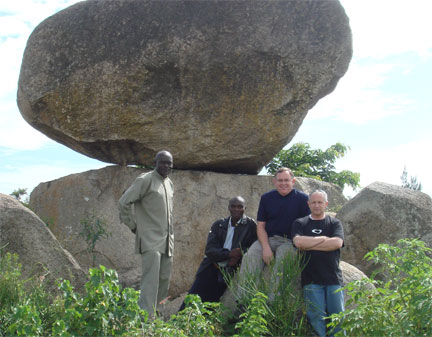 Standing on the Rock! Michael from West Pokot, Leonard, Wayne, and Kent at a stop by the side of the road on the way to Bongoma. No, we didn’t put that rock up there. We’re pretty sure God did, somehow!

We spent a few days in Bongoma, first a day-long training in a stone building with people from the region as well as Mt. Elgon where tribal violence was horrendous. Watching them struggle with God’s love and the hope of forgiveness in the midst of atrocity was quite a conversation. 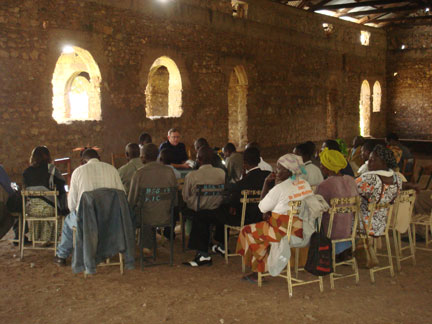 This was actually a building under construction in Chewle, with a dirt floor and stone walls. It felt like first century Palestine. We met 60 orphans here and endured a lightning strike nearby that hit a transformer and exploded it.

Sunday we stayed at Michael Wafula’s compound where 22 orphans are living with his family. They wanted us to stay with them a few days. A number of believers came together for a Sunday gathering that was incredible in the way people were touched. A Moslem woman came in part way through to see what the commotion was about. She was just passing by. As she heard about Father’s love, she turned her heart to God. She told people later that she would never return to Mohammed, now that she found Jesus’ love for her. Then we had a late night discussion about God’s working and how the church in Kenya could reflect the Lord’s glory with greater freedom. 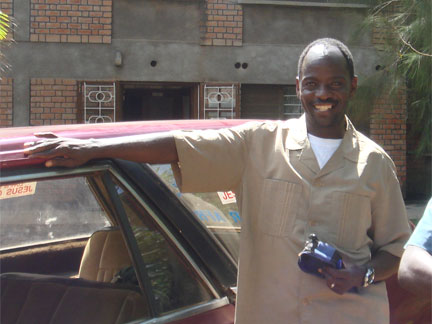 Michael Wafula, our incredible host for these days and a man who is embracing the abandonment of religion to help people really engage the love of the Father. He lives what he talks about and we were enriched by his life and his passion to provide homes for the fatherless and widows all over this region where tribal conflict has left so much devastation.

Monday was our last full day in Kenya. We traveled four hours to Eldoret. I spoke in two different places, a church that was devastated by the tribal violence two years ago and an orphanage in a slum. At the first place many had had friends and spouses die in the violence. They have so many displaced widows and children that they are trying to help find housing, find jobs or skills they can use to provide for themselves, and are supporting each other through the losses in their lives. Many of the people had their homes or business burned or confiscated. One told of people who ran to a church building near where they lived and the mob came, circled the building and threw petrol on it and started it on fire. Anyone who tried to flee was forced back in with machetes, and some children were thrown back in through the windows. Many pastors participated in this violence along with their tribe. The rule of law is thin here. Hundreds of people died within a couple of kilometers of where Kent and I slept last night and a week ago, tensions almost boiled over again.

After the service we visited an orphanage in a slum near here. Again, this was incredibly painful. 100 children whose parents died in the violent clashes and had no family to take them in. The conditions they live in are deplorable with open sewage in the back and mud four inches deep everywhere. The kids sang to us and quoted Scriptures and the staff begged for us to find people who would send money to build them finda a healthy place for these orphans to grow up. Also 25 women infected with HIV, many of them because they were raped during the melee by men who were infected. Some of their husbands had been murdered. 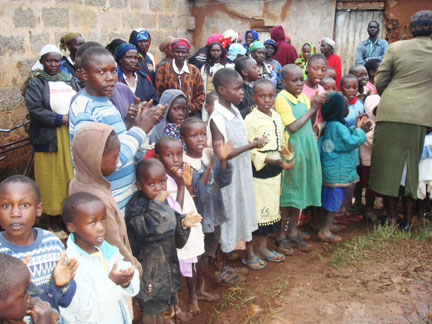 The orphan children at Eldoret singing and sharing with us while standing in the mud. They beamed with smiles and were so excited to see some white people among them. They begged for our help.

One little girl told a poem about not knowing who why her parents brought her into the world and then left here all alone. Who is she? Why is she here? Does anyone care? It was painful to watch. At the end the little girl broke down in tears. Two men standing next to me began to sob as well. One of them, my host on this trip sobbed. He turned to me and told me this same story is repeated all over his country. I was undone. My granddaughters had the good fortune to be borne in the US, and these were born in Kenya. They did nothing wrong to deserve their circumstances, and they certainly don’t need to live in the conditions they live in. But there are hundreds of these all over this part of Kenya. The need is overwhelming. Please pray for God to help them find adequate housing. If you have extra money to send, we can channel resources through Lifestream and put it straight at the need without any administrative expenses. See our How To Help page if God moves you to help. You can find a ‘Donate Now’ button at the bottom of the page. We will be sending additional funds here to help with so many needs.

This has been an amazing trip. The stories we’ve heard and seen of personal transformations as well as people exploring what it is to live loved in a land where people have been taught that suffering proves you haven’t done enough to earn God’s love and he is punishing you. We heard it as the ‘gospel of punishment’, which is really no gospel at all. In the midst of our worst moments is where God makes his love known, not when we’ve earned it. We can never earn it, and the moment we think we have is when we lose sight of mercy and try to live by our own efforts, something we don’t advise. We’ll talk more about Kenya, play some audio clips from here on The God Journey podcast next Friday.

Thanks to all of you who prayed for us and the people here. This was a truly remarkable season in Kent and my own spiritual journey. I’m sure we’ve not yet processed all that God wanted to show us in this. But we both come away with a greater compassion for the people of Kenya and the desperate circumstances that many of these people are in. Please keep praying. There is so much we can do to bless them out of our abundance, if God should lay it on your heart.

Kenya Update: Helping Others Help Themselves

10 thoughts on “Final Days In the Land of Kenya”