Today I’m on my way to Maine to spend some time with people at a camp in Maine, and then I’ll make my way down to Reading, MA before I return home. As I go, I thought I’d leave you with an email exchange I had recently….

It always saddens me how much religion uses hell and God’s wrath to keep people in constant fear that they are not doing enough to keep God at bay. The Gospel is not how terrifying God is that we need to cower in fear, but how endearing he is and if we knew that we would want to come running to him at every moment, even our worst ones.

Here’s how I answered her:

God’s wrath is the consuming fire of his love that seeks to destroy the power of sin and rescue us into his love. Does it rest on an unrepentant sinner?  Absolutely, in the desire to redeem them and burn out the sin that is destroying them.  But when they come to Christ, he has already taken all that for us, so we are no longer objects of wrath, but children of God and part of his family.  Now his work in us removes our shame and invites us in deeper…

That’s why God’s wrath is still coming at the end of the age, to consume sin and create a new heaven and new earth.  But don’t look at it as his hateful anger; it’s not. It is the depths his love to purify. It’s the mother bear coming out of the woods to protect there cubs.  We’re the cubs. We can be rescued by that wrath if we want to be…

Her response gave me a chuckle.  “That’s the most life-giving  description of God’s wrath I’ve ever heard.” Who would think understanding God’s wrath would be life giving?  By why wouldn’t it be? It is that part of his love that is consuming the reality of sin so he can rescue us into his life.

What’s scary is that we can’t survive that cleansing power. It’s just too strong. That’s what Jesus did for us.

Why are so many religious teachers fixated on wrath—painting God as an angry and demanding deity as the motivation for people to come to him? They see his wrath as the source of his retributive anger that seeks to punish man’s failure as the way to vindicate his justice. They keep people afraid of God hoping that will motivate them to live more righteously. However, that thinking can only backfire. Fear cannot transform us, it will only exhaust us as it seeks to trigger our own efforts to be better for God. Only love can transform us.

Wherever anyone or anything is provoking fear in you to get you to serve God better, you have to reject it. It will not serve your desire to know him.  Love is the most powerful force in the universe allowing us to be drawn into God’s nature before fear and shame can drive us out. It allows us to hold our sin and failures before God until he transforms the roots of it from within and we become free enough to embrace his life.

So, wherever you can put more love into the world and remove whatever fear you can, especially as it relates to God’s character and his demeanor toward humanity.

I tell a story in He Loves Me and on Transitions #4 that illustrates my view of wrath: 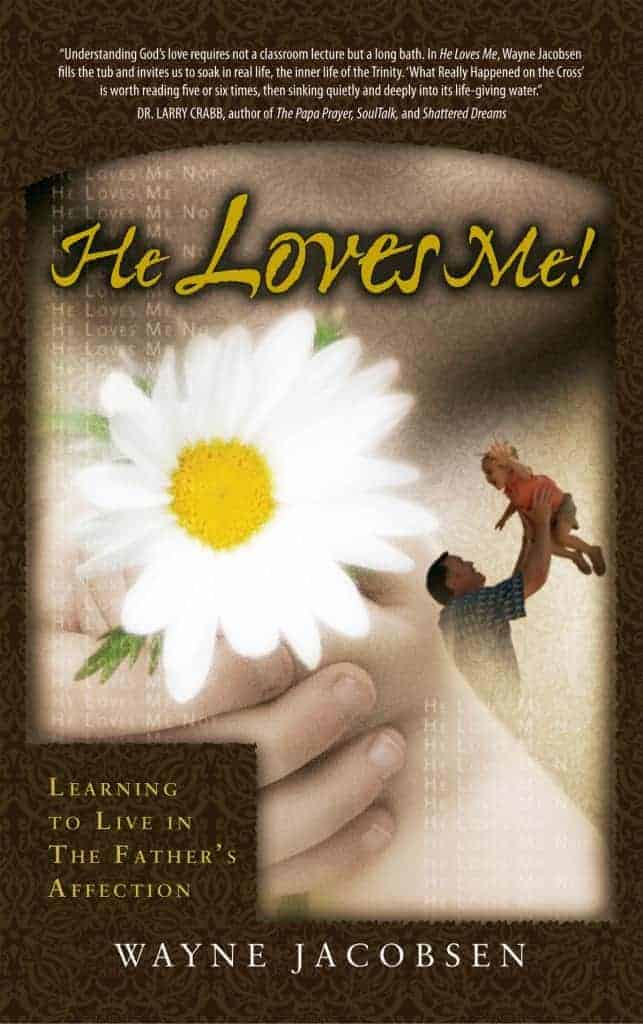 It was the most poignant picture of wrath I’ve witnessed. I had taken my family camping in the Sierra Nevada mountains to escape the heat of our home on the valley floor and to soak in some rest and relaxation. I was hunkered down in a lounge chair deeply engrossed in a novel. My wife, Sara, was coming to join me when suddenly we heard screams of pain from our two-year-old son, Andy.

He’d been playing in the dirt not far from our campsite. As I looked up he was stomping his feet and waving his hands wildly. Swirling around him were flying insects, backlit by the sun; Sara immediately recognized them as bees. Somehow he had stumbled into their nest in the ground and they were attacking him relentlessly.

Before I could extricate myself from the reclining chair, Sara was rushing to the sounds of his screams. Even though she is allergic to bee stings and got stung for her efforts, she angrily swatted at the bees as she scooped up her son to run with him to safety. When I got to them she was stroking his head with comfort even as she was panting from the overload of adrenaline still coursing through her veins. Soon she reacted to the venom and we took her to the hospital for treatment.

If you want a picture of God’s wrath, I can think of none better. She was as angry as I’ve ever seen her, but the anger wasn’t directed at Andy nor did it seek his punishment. She simply risked herself to rescue someone she loved so deeply.

That’s what God’s wrath is like. He sees the evil that mars his creation and destroys the people he loves, and he must be rid of it. His wrath consumes evil and wickedness and as such does not exist as the opposite of his love, but as an expression of that love. He must protect and set free the object of his affection.

I’m sure when my son first saw Mom running at him, eyes blazing with anger, he thought he was in trouble. Even though he didn’t know what he’d done wrong, he was already recoiling from her as she approached. Only after she had swept him to safety did he realize he was not the focus of it, but its beneficiary.

Our shame-consciousness does the same thing toward God. Whenever we see God acting to consume sin, we internalize the anger against ourselves. But that isn’t where the wrath is primarily directed. “The wrath of God is being revealed from heaven against all the godlessness and wickedness of men . . . ” (Romans 1:18)

It’s not people God seeks to destroy but the sin that destroys his people. In that sense God’s wrath is far more curative than it is punitive. Its primary purpose is not to hurt us, but to heal and to redeem us.

Finding a Refuge in Love

What It Takes to Change the World

Why Won’t He Change Me Faster?

2 thoughts on “It’s Love, Not Fear that Will Change the World”