As I was preparing for my trip to Indiana, two men I didn’t know asked if I could come early to do some taping with them.  They are working on a documentary about people moving beyond the congregational model to celebrate God’s work in them. They asked if they could interview me to use it in this documentary. They wanted to do an interview with me from which they would take some clips to inclue in the documentary.  I told them I had long been praying for the opportunity to be interviewed in a video by someone who didn’t know me and was curious about my life and journey. I hoped for a wide-ranging interview that would ask the difficult questions about my journey, my motives, and my passion to be part of God’s work in the world. They decided both objectives could be served by doing that kind of interview and then pulling the clips out of it that would make the most sense in their documentary.

The setting they wanted was a campfire conversation. We waited for the sun to set, lit the fire, and talked for an hour and fifteen minutes as the moon rose in the easter sky.  A fabulous setting 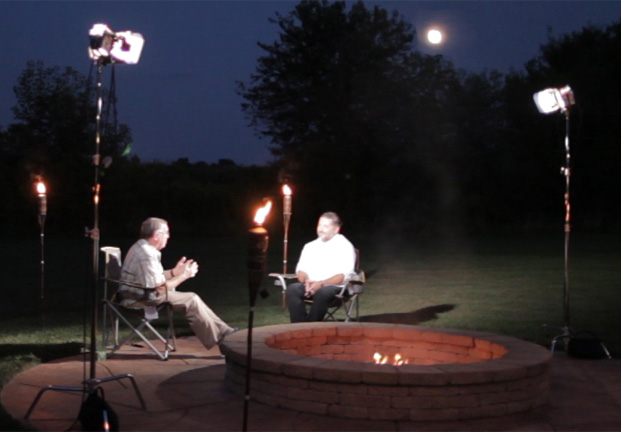 We should be able to post that in a couple of weeks. Jeff Heer was the host and asked great questions. Dan Madison handled the technical aspects along with his friend Chris. This is exactly the kind of casual conversation I was hoping for and as I watched the rough-cut yesterday, I can’t believe some of the things I said—a good sign that Someone was at work beyond me. I can’t wait to share it with you.  Until then here’s an excerpt I particularly liked:

“Scripture is clear about our human inability to manage others without giving ourselves to abuse or opulence.  It even happened for God. Israel wanted a king and he gave them two of the best men he had and both were seduced by the power of being the king. I’ve seen so many good brothers and sisters, people I love, who really have a heart for God but get into the environment where they’ve got to tell other people what to do to make this work. Managing people’s spirituality is a drug that we have an inability to resist and I don’t think I’m above it.  I’ve gotten out of environments where I need to manage people spiritually and into environments where I equip people relationally, because that’s not seducing.  It doesn’t destroy me and make me think I’m better than I ought and get to tell others what to do.

“I want to live in this love and help others people do that.  That’s what we get wrong. We don’t learn to live loved first and see what church emerges, we start with people who don’t know they are loved, obligate them to things and then wonder why that doesn’t take on the dynamic we hoped for.  What we learned is, it’s not by our human effort that God want to do these things.  He just wants us to be his child in the earth and as we love him and let him love us he will take us on a journey and some amazing things will happen.  And he will build his church, which is what he always promised to do.”

If you can’t wait, hear are two other opportunities.  Last week I did an interview with Mike and Susan for the Chief Sinner podcast.  We talked about the disconnect between accountability and community and the absurd idea that one will produce the other.  They are polar opposities. You can either have accountability or community, but not both. An accountability setting will never produce true community where people are loving, open, authentic, and honest, the very environment in which the transformation of Jesus takes hold in people’s hearts.

Earlier today I did an interview on getting back into the Scriptures as a relational treasure not an obligation on Cliff Ravenscraft’s, Encouraging Others in Christ Podcast.

That’s a lot of media for me in a few days, but I appreciated how real and personal all of these conversations were.

What It Takes to Change the World

Letting Jesus Take Shape In You